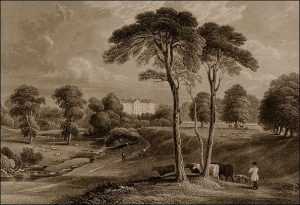 Leslie House, Fife, seat of the Earls of Rothes until 1919

On the site of previous houses, in 1660 – 70 a magnificent mansion was built for the 7th Earl of Rothes (later the Duke) originally known as ‘The Palace of Leslie’. Built in the style of Holyrood Palace, Edinburgh, it was designed as a quadrangle and extended to 80 bedrooms, the Long Gallery was said to be 3ft. longer than the one at Holyrood. On Christmas Day 1763 a disastrous fire burned the house to the ground. Bad weather at the time prevented effective firefighting and many valuable items were destroyed. The present house is the least damaged wing of the original Palace, the west wing, rebuilt and refurbished. The 10th Earl rebuilt it and died there in 1767 soon after its completion.

In 1982 The Clan Leslie Charitable Trust was set up in Edinburgh, under Scottish Law, Scottish registered charity No. SCO 14636. The purpose of the Trust is to safeguard Scottish historical chattels and heirlooms in general and in particular those relating to the Leslie family.

The main aims of the Trust are:-