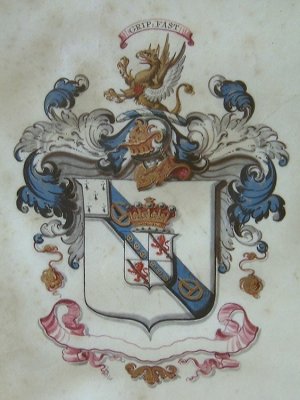 1817 Royal Licence for George Gwyther, husband of Henrietta Anne, now Countess of Rothes in her own right, granting him the right to assume the name and Arms of Leslie under the terms of the Charter of 1660. He became George Leslie and ‘differenced’ the Leslie Arms by adding a ‘Canton Ermine’ to the Arms and a red rose to the breast of the demi-griffin of the Crest. He also displayed the Arms of the Earl of Rothes surmounted by an Earl’s coronet in the centre of his Arms. These ‘differences’ were for him only, any children would revert to the ‘undifferenced’ Arms.