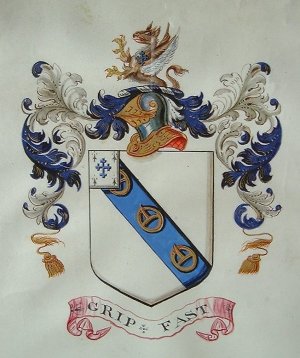 1886 Royal Licence for Martin Edward Haworth, husband of Mary Elizabeth, now Countess of Rothes in her own right, granting him the right to assume the name and Arms of Leslie under the Charter of 1660. He became Martin Edward Haworth Leslie and again ‘differenced’ the Leslie Arms with a ‘Canton Ermine’ and in addition he added a blue ‘Cross Crosslet’ to the Canton and to the Crest. The Cross Crosslet is one of over a hundred styles of cross formed by adding transverse pieces to each member of a plain cross.