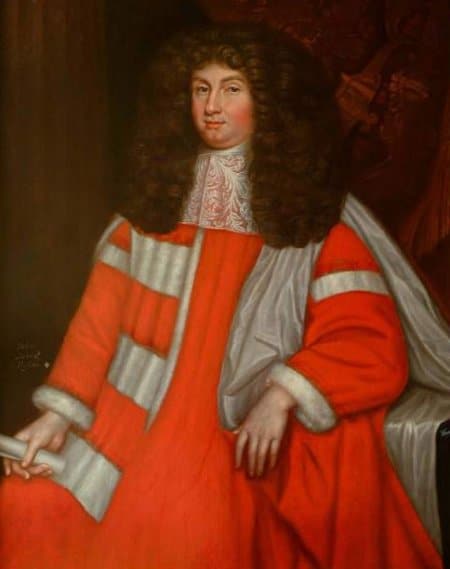 Jacob Schunemann.
Oil on Canvas 47 x 38 ins.
Wearing the Chancellor’s robes.
Inscribed ‘John, Duke of Rothes’.
In 1651 he carried the Sword of State at the Coronation of Charles ll at Scone. Captured at the battle of Worcester 1651, returned to Scotland 1655 and finally liberated 1658 on payment of a fine to Oliver Cromwell. After Charles ll Restoration 1660, appointed President of the Privy Council of Scotland and 1661 Lord High Chancellor for life. 1680 He was created Duke of Rothes, Marquis of Ballinbreich, Earl of Leslie, Viscount Lugtoun, Lord Auchmoutie and Caskieberrie. (See Charter B4). These titles were conferred on him and his heirs male only so the Dukedom died with him in 1681. A previous charter obtained in 1663 enabled the Earldom to pass through the female line so on his death his elder daughter, Margaret, succeeded as a Countess in her own right.
He died at Holyrood in Edinburgh 27 July 1681. (M7,M11,M12) As a great statesman he was awarded a state funeral. The procession bearing the body back to Leslie for burial was said to be 17 miles long.(E63)